When I say: I’m a nobody.
What I mean is: I’m scared of being seen.

I say: This is going to be harrrrd.
But I mean: This already feels uncomfortable, and I haven’t even started.

I say: This is impossible.
But I mean: I don’t see a way through.

I say: This is so damned fucking impossible – shit! What the hell was I thinking?
But I mean: I need help.
or I need more time.
or I could use some tea.
or I need a hug.
or I need a nap.
or I need another nap.

Ya know, I try to be careful with my words, and yet, this is what’s come up for me in the past two months, and especially these past few days.

Those things I say to myself, sometimes on infinite repeat, are both absolute and absolutely unhelpful.

They don’t allow any room for something different to happen, for something to change, and, at least for me, I’m realizing that’s what they’re designed to do.

I’ve been having the most draining anxiety dreams. The usual: having to take a final exam I haven’t studied for or for a class I haven’t attended, going back to college to finish a project to get my diploma (which I’ve had for 25 years), or simply looking for something I can’t find.

It makes me want to skip sleeping altogether or drink myself dreamless, but those don’t work, and they make things worse.

I wake up semi-fetal around my pillow with clenched fists and every muscle aching from a long night on guard.

On days like today, I wake up and try to meditate or have a Think, and my hands won’t stay still … they grab-grab-grab at the covers, tap-tap-tap my leg, flutter like they’re going to fly away. I can’t unclench my jaw.

And the even crazier part is I can’t tell if this is all because of what I’ve done so far or what I’m doing right now or what I intend to do next – perhaps all of the above.

But the craziest part?

The craziest part is I’m going to keep going.

Everything worth having is on the other side of this moment … a moment that started, I think, when I got on the plane for Minneapolis back in July.

I started something that grew bigger than I intended or expected or imagined and continues to surprise me in every way.

I found that I’m still in here, despite all.

And somewhere in there, I started calling in all the parts of myself I’d thrown away or set aside or hidden or hidden from. Everyone’s been coming home from wherever they’ve been all this time, ready or not.

And I blame Staci. And Nona. And a lot of other folks whose names I can’t recall right now, but if you’ve talked about truth or trauma in the past 6 months, consider yourself named and blamed, too. 😊

I feel stranded at times, as if I’m nowhere and don’t know which way to go. I can guess when this moment started, but I have no sense of when or where it’s going to end.

And then last night, these words from an old song came to me…

“I was bruised and battered; I couldn’t tell what I felt. I was unrecognizable to myself…”

They ran through my head a few times, and by a few, I mean 9 or 10, and I sighed long and deep and hard over and over, and I finally felt some relief.

Because Bruce Springsteen. And that dear moment before that heartbreaking movie, with his rough croon and its city visions, which I saw with my first real boyfriend about a million years ago. My cheeks were smeared with tears before the opening credits were even over, and the song has owned me ever since then.

This is only the second time it’s come for me, though.

This is my long and meandering shout-out to anyone who’s feeling lost and stranded in that in-between place, where nothing’s wrong, really, but it doesn’t feel right, either.

Where there’s an alarming amount of work to do, it’s all important, and it’s all worth it.

Where you can’t see how it’s going to turn out, but you’ve come too far to turn back, and there’s no place or time to stop.

It’s pretty uncomfortable, here in the middle bit. At least for me.

If it’s the same for you, I can only offer you what I tell myself:

And when I say: Keep going.
What I mean is—

You can do this.
You’re not alone.

Be patient.
It will come together.

You’re my girl.
You’re the best.
You’re not alone.

p.s. If you haven’t yet, do sign up for Kerstin’s Ask project (it’s free, it’s delicious, and it won’t sign you up for anything else) » https://kerstinmartin.com/impossible 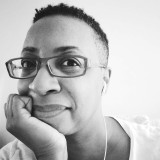 Writer, wordworker, and podcast producer. Enjoys baking, knitting, her new cat, and her old man. Lives quietly on the plains of central Montana, "where all the knives are sharp and all the guns are loaded." 😊 Here's more »